Dangal’s and Shemaroo’s entry shows there is ad-supported gold at the bottom of the Indian consumer pyramid if you can keep the costs low.
Vanita Kohli-Khandekar reports.

Why would anyone launch a TV channel in the middle of a lockdown?

Because the Rs 3,000-crore free-to-air television market is waiting to be taken. And, there is no time like the present.

Many are home and TV viewership is constantly rising.

These could be in 38 million homes that have DD Freedish, a free DTH platform, or 15 million cable homes that do not take any pay channel.

They bring in over half of India’s total TV viewership going by Broadcast Audience Research Council (BARC) data.

Most are in the rural/small town areas of the Hindi belt and parts of Maharashtra.

This is the territory Shemaroo TV, a Hindi general entertainment channel (GEC), launched last month, has staked for itself.

“DD Freedish has 55 channels, but the choice of viable entertainment is less than 5 to 10 channels. Because of the new tariff order the free-to-air space is vacant,” says Hiren Gada, CEO and CFO, Shemaroo Entertainment.

In the build up to the implementation of the tariff order, Star, Sony, Zee, and Viacom18 moved out of free TV in 2019 summer.

Since the order was bound to push up prices, the big four wanted to protect pay revenues by not having free offerings.

This left 240 million with almost nothing to watch.

That is the first reason that Indore-based Enterr10’s Dangal TV became the most watched Hindi GEC.

When the big four moved out, Dangal TV grabbed the opportunity with both hands, shaped up its re-runs oriented act and is now India’s third most watched channel.

“Shemaroo has a strong library base, it is a natural progression for it to get into broadcast. They don’t come with a big cost infra except if they do fresh programming,” says Divya Radhakrishnan, managing director, Helios Media. It has worked with Enterr10 as an ad sales concessionaire earlier.

The Rs 568 crore Shemaroo, which was a video circulating library in the 1980s, sits on almost 4,000 titles across genres and languages.

It picks films or TV shows in their second or third cycle of moneti-sation after their first theatrical run or airing is over. This reduces risk and lowers cost. It owns almost 2,000 Hindi films.

There are an almost equal number of Marathi, Gujarati, and Punjabi films and TV shows.

It makes money from slicing and dicing this content selling it to telecom operators, DTH players, broadcasters, and online, et al. Traditional media brings in 80 per cent of its revenues and digital the rest. 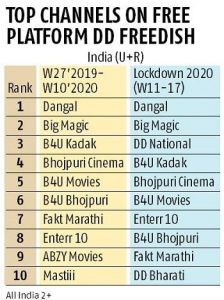 “We have been a quasi-broadcaster for long. The only thing we had to set up was distribution and advertising,” says Gada.

The launch of Shemaroo Marathibana put that in place. Its rise to one of the top 10 Marathi channels made Shemaroo sure that its free-to-air model was perfect for the India it was targeting.

“This category has undersold and under positioned itself because it was originally occupied by the big broadcasters who used it for re-runs and repeat programming,” points out Radhakrishnan.

Dangal’s and Shemaroo’s entry shows there is ad-supported gold at the bottom of the Indian consumer pyramid if you can keep the costs low.

Besides the big four moving out, there is a second reason why Dangal did well.

For very long, the rural and small town India reflected poorly in the TV viewership sample and advertisers would not spend enough.

Ever since it came into being in 2015, BARC has worked to keep increasing the representation from rural India.

The viewership numbers are weighted to the universe; so DD Freedish gets huge weightage in the sample.

That explains why Dangal gets its fair share of ad revenues — estimated at Rs 400 crore. 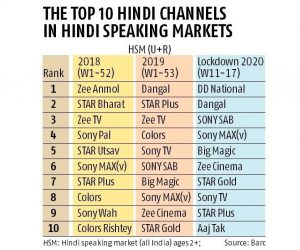 Advertisers are hardly reacting to the over 32 per cent surge in TV viewership during the lockdown, why would a new channel excite them?

He is right, life will begin only after this lockdown ends fully. 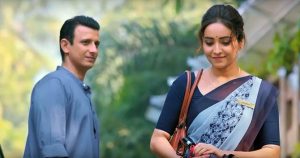 Of course, you will watch a movie in a theatre!
Audiences are missing theatres desperately and will go back to…