Senior officers recounted extreme Chinese brutality to the Indian prisoners, with some of them being pushed over cliffs and soldiers’ bodies being recovered from the Galwan River.
Ajai Shukla reports.

In a steep escalation of the ongoing India-China border face-off in eastern Ladakh, soldiers of China’s People’s Liberation Army attacked and killed 20 Indian soldiers, including a colonel, on Monday night.

This is the first deadly clash on the 3,488-kilometre disputed border since four Assam Rifles jawans were ambushed and killed by Chinese border guards in October 1975.

In a statement on Tuesday morning, the army said: ‘During the de-escalation process underway in the Galwan Valley, a violent face-off took place yesterday (Monday) night with casualties on both sides.’

The loss of lives on the Indian side includes an officer and two soldiers. Senior military officials of the two sides are currently meeting at the venue to defuse the situation,’ the army stated.

Late on Tuesday evening, another statement from the army said: ’17 Indian troops who were critically injured in the line of duty at the stand-off location and exposed to sub-zero temperatures in the high altitude terrain have succumbed to their injuries, taking the total of those killed in action to 20.’

The statement also said: ‘Indian and Chinese troops have disengaged at the Galwan area where they had earlier clashed on the night of 15/16 June 2020.’

There were unconfirmed reports that five PLA soldiers were also killed in the clash.

Senior officers recounted extreme Chinese brutality to the Indian prisoners, with some of them being pushed over cliffs and soldiers’ bodies being recovered from the Galwan River.

Sources said the clash occurred on the Indian side of the Line of Actual Control in the vicinity of Patrolling Point 14 when some 300 PLA soldiers attacked a group of about 50 Indian soldiers.

Army sources denied that firearms were used. The casualties apparently occurred in brutal hand-to-hand fighting with clubs and staves.

China’s foreign ministry spokesperson in Beijing blamed Indian troops for the clash, claiming that they had illegally crossed the border twice on Monday and attacked Chinese soldiers. Beijing, he said, had ‘lodged strong protests’, but continued to work toward resolving tensions.

Meanwhile, senior government sources said the Chinese troops who had intruded into Indian claimed and patrolled territory last month continued building their defences, notwithstanding talk about de-escalation and disengagement.

In the Pangong Tso sector, Chinese troops continue to occupy the area up to Finger 4, which includes 8 km of Indian-claimed territory between Finger 8 — which is the Indian version of the LAC — and Finger 4.

In the Galwan River sector, the PLA still occupies the area up to PP 15 and PP 17 and the heights overlooking the Galwan valley.

Reports are also emerging that Chinese troops have entered the Depsang area, which lies to the north of Galwan, in the Daulat Beg Oldi sector.

Here they have reportedly secured the areas up to PP 12 and PP 13. This could mean that the Indian Army has one more sector to safeguard, besides the Galwan and Pangong sectors where the PLA earlier encroached, and the Harsil sector in Uttarakhand, where the PLA has also built up troops.

Depsang is the same sector where India and China saw tensions in 2013.

The current crisis began in end-April when Indian intelligence reported Chinese troop buildups across the LAC. However, the Indian Army chose not to deploy a countervailing force because of the COVID-19 pandemic.

Consequently, the army was taken by surprise when a large Chinese force crossed the LAC into the Galwan and Pangong Tso areas in late April.

While clashes between Indian and PLA patrols are not unusual at this time of the year, there were indications even before Monday that the current confrontation was a departure from the normal.

First, the PLA had encroached into areas like Galwan that were traditionally peaceful.

Second, they entered in unusually large numbers that were in the thousands.

Finally, this was clearly not a temporary occupation of disputed territory of the kind that took place in Depsang in 2013, or in Chumar in 2014.

This time PLA soldiers are digging defences, preparing bunkers and deployed artillery guns to the rear (albeit in their own territory) to support the intruders, said sources.

The PLA intrusions into Ladakh do not appear to be a localised event, being spread across a frontage of 2,000 km, including the area of responsibility of different PLA brigades and divisions. That suggests centralised coordination at the higher military and political levels. 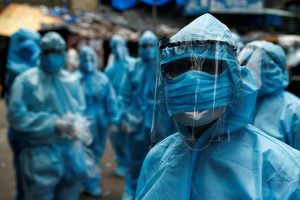 The virus can’t survive infinitely
When the virus, in a way, tires itself out, because…