Audiences are missing theatres desperately and will go back to them within two-three weeks of them reopening.
All those hours of films on television and OTT have not reduced the audience’s need for the theatrical experience, discovers Vanita Kohli-Khandekar.

This is something squabbling theatre chains, studios, and even over-the-top (OTT) providers should read.

Audiences are missing theatres desperately and will go back to them within two-three weeks of them reopening.

All those hours of films on television and OTT have not reduced the audience’s need for the theatrical experience.

However, the precautions taken for social distancing and sanitisation by theatres will play a crucial role in their decision to visit.

They would rather have theatres keep the ticket price unchanged and spend money on implementing safety measures than discount ticket prices.

That and more is what Back to the Theatre, consulting firm Ormax Media’s report on the expected theatre-going behaviour in India post COVID-19, states.

It is based on online interviews with 1,000 people across 58 cities in India.

Since Ormax self-funded the research, the sample is small, but it is “representative”, asserts Shailesh Kapoor, CEO, Ormax Media.

Each of the respondents is a regular theatre-goer who watched a film in a theatre at least once in two months.

More than 80 per cent of the Hindi, Tamil, and Telugu film audience miss the theatres. Note that these are the three largest segments of the Rs 19,100crore Indian film business.

Much of the report is bound bring cheer to the industry. There are, however, two things that could be downers.

One, about 48 per cent of the respondents said they would spend less than normal amounts on food and beverages (F&B) out of Covid concerns.

Ormax estimates a 60 per cent drop in F&B sales after opening up. That is rough.

Theatre chains get half their revenues from ticket sales, the rest from F&B and advertising. The latter two streams are what bring in the profits.

With costs going up, a drop in F&B will stress the bottom line even more.

Two, while national chains score high on audience trust to effectively implement safety measures, chains with limited geographical presence and single screens are seen lacking this credibility. Their credibility though is higher with Tamil and Telugu speaking audiences.

Not surprising, given single screens dominate those markets. Ormax reckons this perception can limit the footfall at single screens 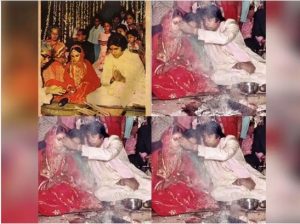 Amitabh Bachchan shares a little secret with fans on the occasion of his 47th wedding anniversary; also posts a picture of the marriage ceremony
Amitabh Bachchan is quite active on social media and loves to…